Starting with the frame

The Wirraway is constructed around a welded chrome-molybdenum steel allow tube framework, so that’s where I need to start as well. Here is what the steel tube framework looks like: 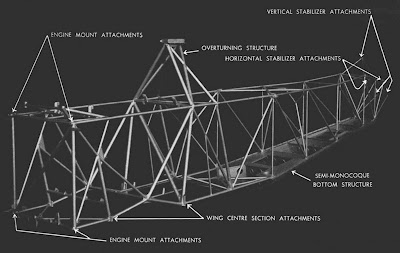 The dimensions for each of the tubular members (length, outer diameter and gauge) are listed in the Wirraway Overhaul and Repair manual, so this will be the data I use to create the virtual framework. The fuselage frame is divided into four sections:


Three of these sections are constructed from welded tubes and the fourth is an aluminium sheet monocoque construction. First I will start on the main frame. The fuselage reference line (F.R.L.) or centre-line is 14¾ inches below the top cross-member in this front face, and the thrust line is another 4 inches below the F.R.L. The side frames are 30 inches apart (from the centre of the tubes), and the main frame is 106 ½ inches long from the centre-line of the front verticals to the centre-line of the rear verticals.
The diagonal bracing tubes down each side of the main frame are not symmetrical, a fact missed by many scale modellers. On the starboard (right) side of the main frame, the 4 tubes next to the rear seat are angled outwards, to allow the rear seat to pivot so it can face forwards or backwards. In the centre of the main frame, there is a strong roll-over brace to protect the crew in case the aircraft overturns. The starboard side frame is also missing one upper diagonal bracing tube at the very front, to allow for the installation and removal of the magazine for .303 rounds for the front guns. And at the bottom of the main frame below the rear seat there is a heavy structure supporting 2 plates for mounting the seat pivot bearing.
The first step in constructing the frame is to create all the tubes, and the result looks like this: 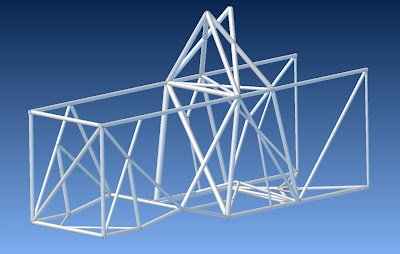 The next step will be to start adding all the fillets, brackets and attachments which are also welded to this basic structure…

Posted by Unknown at 6:10 AM No comments:

Email ThisBlogThis!Share to TwitterShare to FacebookShare to Pinterest
Labels: 31 Fuselage

The CAC Wirraway was a training and general purpose aircraft built in Australia around the time of World War Two. It was representative of the transition point in aircraft design from "rag and tube" construction to "stressed skin" construction, with different sections of the airframe being made using both methods.
This blog will trace the creation of a 3D virtual Wirraway, incorporating all the structure and components of the real aircraft.

First, we need to get organised.

CAC based the Wirraway on a design which they had licensed from North American Aviation, Inc. - the NA-16-2K.This design was modified according to RAAF requirements with extra capabilities (such as an increased bomb load) plus RAAF standard communications equipment and armament. However much of the structure remained common to the NA-16-2K. The design drawings also remained common and CAC followed the NAA part numbering system, as follows:

Where aa represents the contract (or project) number for the particular aircraft design, as follows:

So I will be following the same organisation for this blog and the parts for my virtual Wirraway. The tags shown on the right side of the blog will refer to the drawing system listed above.

Next, we need to decide which model of the aircraft we will replicate. This is relatively easy. The Mk II Wirraway was the most numerous version, and was involved in the most interesting episodes in the Wirraway's service life, so that gets the nod. But unfortunately there are many minor variations within the "Mk II version", depending upon the production contract, as well as which CAC Engineering Changes, RAAF Technical Instructions and RAAF Technical Orders were implemented onto each particular airframe. So I'll start with a generic Mk II aircraft (say a CA-3 production contract) and see where that takes me.

I will also need a virtual engine for this virtual Wirraway, and luckily a lot of documentation is available for the Pratt & Whitney Wasp R-1340 S1H1-G engine used in the Wirraway.